Since its formation in 2017, the Region 2 Band Planning Committee has worked to not just keep the band plans current, but also to determine the level of activity on the bands. This information has been especially valuable for the VHF and UHF bands, where it is often used to defend Amateur allocations from others who would like to take our frequencies.

One of the primary operating modes on the higher bands is repeaters. It’s probably safe to say that almost every Ham has used a repeater at some point. Just how many repeaters are there in Region 2 however? Wonder no more! As part of its work, the Band Planning Committee has consulted a number of online databases, and compiled the numbers. They are included in the table attached below.

It’s evident from the numbers that repeaters are a very popular communication mode for Hams. There are 25,307 VHF and UHF repeaters throughout Region 2, on all bands from 6M (50 – 54 MHz) to 23cm (1240 – 1300 MHz). Most are FM, but there are increasing numbers of digital mode repeaters, as well as some Amateur Television (ATV) repeaters. There are also a number of 10M repeaters, not included in the table.

It’s no surprise that the countries with larger Amateur populations and land area generally have greater numbers of repeaters. There are some interesting observations that can be made however. The United States is unique in having more repeaters on the 70cm band than the 2M band. This may be because there are no 2M repeater frequencies available in densely populated areas, necessitating the move to 70cm. As well, despite its relatively small population and land area, the Dominican Republic has 102 repeaters, on 2M, 1.25M and 70cm.

Of course, repeaters are used for a wide variety of purposes, from general “rag-chewing” to providing vital emergency communications in time of disaster. Whatever their use however, repeaters are an important feature of Amateur Radio – 25,307 repeater owners throughout Region 2 can’t be wrong!

Please note that the repeater statistics are based on a variety of online sources, and they may not be perfectly correct. Repeaters numbers for Puerto Rico and the US Virgin Islands are included in the overall American numbers. Countries not listed in the table either have no repeaters, or no information was available. Should you have updated information, please forward it to the Chair of the Region 2 Band Planning Committee, Al Penney VO1NO, at alphonsepenney@​gmail.​com. 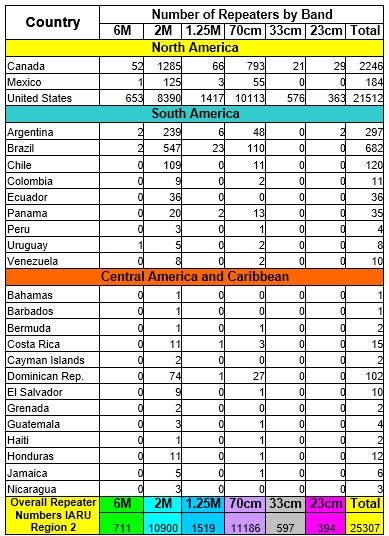