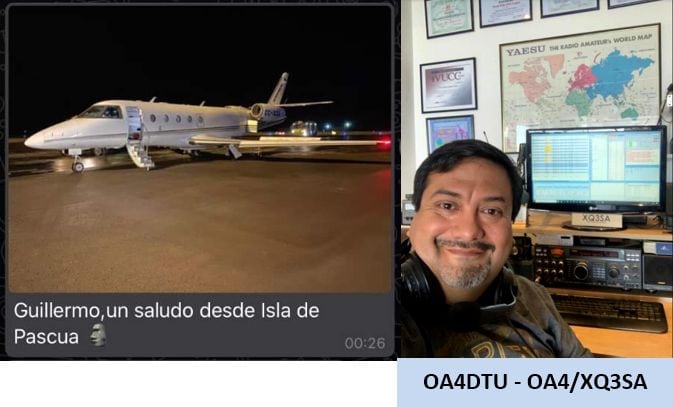 Last July 9, an air ambulance en route from Santiago, Chile, to Easter Island lost communications while they were more than 1,000 nautical miles away from the mainland. The pilot resorted to the frequency of Cadena Peruana de Socorro (the Peruvian Relief Net) in 7,100 kHz to ask for help. Luckily, Guillermo, OA4DTU, and Giancarlo, OA4DSN, were on frequency. Guillermo answered the call and then called Oceanic Air Control in Chile, the official entity in charge, who were already on alert after they lost contact with the air ambulance. The HF radio at Easter Island was not in operation at that time, which complicated the situation.

After several phone calls to that entity to let them know about the airplane’s position and route, approximately at 0430 UTC, the pilot reported that he had made VHF contact with the tower at Easter Island and he had received descent and landing instructions.

This provoked the joy and relief of all those involved in the communications effort. Later, the pilot called Guillermo by phone to thank him for his help and sent him a photo of the air ambulance on the runway while they waited for the patient to be transported to Santiago, Chile.

This operation lasted about 3 hours, from the time of first contact until the airplane arrived at the destination, with messages of gratitude being sent by Oceanic Air Control for Guillermo and for Cadena Peruana de Socorro.

Once again, the positive role of the radio amateurs in risk or emergency situations is confirmed!