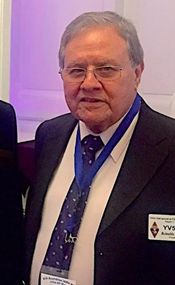 Born in Caracas, Venezuela in 1942, he obtained his first license as YV5AMH in 1960, which later changed to YV5AM, and also operated as /W5, /IØ, /OH2, /OHØ, /LU, YN1AM, and HP1YV. He participated in four DXpeditions to Aves Island YVØ and two to Aland Islands OHØ, besides activating several Venezuelan islands valid for IOTA, among them Los Monjes, Isla de Toas, La Tortuga and La Blanquilla, Los Frailes.

An avid DXer and passionate contester, he held the DXCC Honor Roll with 352⁄339 countries confirmed, had the 5‑band DXCC and the DX Challenge. Reinaldo was a member of Grupo DX Caracas and of the Venezuela DX Club, which operated in contests as YW4M, and YV4A, obtaining high scores all the time, especially in the multi-multi category of the CQ World Wide SSB contest.

Among his work in radio amateur organizations, worth mentioning is his participation in IARU R2, which he joined in 1998, holding several positions, such as President of the Executive Committee from 2007 to 2019, as well as member of the Administrative Committee at the world level. He was a member of the IARU core delegation to the World Radio Conferences of Geneva in 2008 and 2011. Always willing to help, after being President of IARU R2, he became manager of the IARU R2, a position that he held until his passing.

In real life, he held a law degree and was also a talented diplomat, with a career of 36 years in the Venezuelan foreign service, serving in countries such as Finland, Belgium, Argentina, the Vatican, and others.

Ramón Santoyo, XE1KK, IARU-R2 current President stated: “Reinaldo was a very dear friend. His contributions to the work of IARU-R2 were always very significant and transcendental. He will be missed and remembered for his always warm sense of humor and his passion for amateur radio”.

José Arturo Molina, YS1MS, IARU-R2 Vicepresident and Area D Director commented that: “Reinaldo was a teacher, a guide in the work of IARU, a person whose experienced allowed him to face the most difficult situations with ease, always in command of the situation with his ever-present smile”.